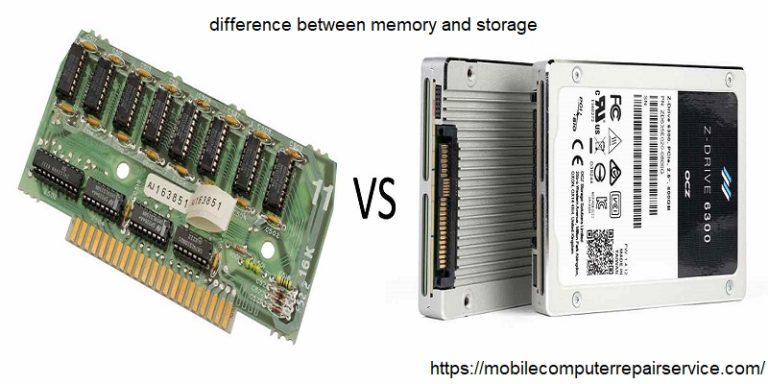 Both memory and storage are indispensable to the operation of a computer. In fact, both of them are crucial to the use of not only a computer but also any kind of device that requires them. If you’re willing to bring some upgrades and wondering which one between the two is more about PC performance, you should have the knowledge about both of them. So, what’s the difference between memory and storage? Keep reading.

Difference Between Memory and Storage

In this article, we’ll talk about the differences by discussing both components in details and how they’re associated with the performance of any device that uses them.

Definition of Computer Memory and Storage

At the outset, you should be able to distinguish memory from storage, and knowing what each of them does can be a good point to start with.

RAM is called Random Access Memory, meaning that whatever is stored in it is accessible almost instantly, no matter the location it gets stored in. Thus, its operation is blazing fast, like milliseconds fast. It has a superfast path to the central processing unit (CPU) of a computer, which is known as the computer’s brain.

Having non-volatile besides volatile storage is a must for a computer because a non-volatile storage system is the place where data can be kept even through your computer is shut down or not in use. It saves the users some time reloading and/or re-entering whatever is on the storage every time they want to use the device.

There’re two most typical types of storage available, such as a hard drive and a solid state drive. Look below to learn how these two options differ from each other and why you can rely either of them.

Both memory and storage can either be the driver or the bottleneck to PC performance in some ways. Here’s a detailed overview of the roles both of them play to define the performance graph of a computer.

The role of memory is best understood as you use your computer for day-to-day purposes like email management, web browsing, playing games, watching Netflix, videos, and some simple yet productive works. Modern computers come equipped with adequate memory required for allowing these operations.

However, your personal preferences may take the thing further. You may love a little upper hand to receive new improvements or updates in the operating system and apps because more advanced versions or their updates often require more memory for better experience.

Some users are inclined to do specialized works which include multimedia editing, 3D rendering, large-scale operations, etc. These tasks are more detail-oriented and require a higher amount of computing power and resources.

Having a typical memory size may allow the applications to run, but you won’t enjoy working that way in the face of frequent failures to open, unexpected crashes, lagging, or frozen states. This is where a memory device with larger capacity is one of the key upgrades you need.

While you might have heard that it’s possible to upgrade the memory hardware as required, truth is that you can’t always count on the idea because some models don’t accept any upgrade. Having one of those models, you can’t really enjoy enhanced performance.

Before buying any computer, it’s good to know whether or not you can have one of its parts replaced or upgraded without being forced to replace multiple components at the same time. However, the majority of today’s computers don’t suffer this limitation.

Here’s how your computer’s performance may get affected by the capacity of RAM. Running a few applications, opening documents, and doing several activities, you can see that the RAM memory is nearly consumed because each of the processes uses a share of the RAM leaving it nearly occupied.

In case such an event happens, the computer writes the necessary information temporarily to a predetermined part of the SSD or hard drive, which we know as virtual memory. The process is actually called data swapping from the memory to the storage, which comes as one of the standard OS features these days.

Alongside RAM, the storage of your PC holds great significance when it comes to performance. No matter the capacity of the RAM installed on your PC, some information need to be written and read to and from the storage, which can be the SSD or the hard drive.

The sizes and speeds of hard drives vary wildly. An HDD that operates at 5000 RPM has its central axes turning at 5000 RPM (revolutions per minute). For richer or neater computing performance, a 7200 RPM hard drive is required.

Some environments involve specialized operations requiring up to 10,000 RPM hard drives or even higher. The faster your drive; the more expensive it can be. Also, it’ll operate louder and consume more power. For most individual users, these devices are just optional.

Disk technologies have seriously evolved over the years and today’s disks are manufactured incorporating more advanced technologies to make the HDDs bigger and faster yet smaller.

SSDs are the result of an innovative technology that makes use of computer chips in place of spinning disks to make the drives faster and energy-efficient. These devices also produce a smaller amount of heat than the HDDs.

Unlike HDDs, SSDs aren’t much susceptible to physical jolts or magnetic fields. Such characteristics make them ideal for use as a portable storage option. The production of these drives is more expensive than that of HDDs, which means more bucks and production efforts per gigabyte.

You can go through a full article on the difference between HDDs and SSDs for better understanding before choosing either of them for your personal or office uses.